This is getting messy, but let’s go down the rabbit hole for a second.

It started with a WikiLeaks email posted late last night which you can see right here:

Initially, the email seems innocuous enough. Richard Leon is a federal judge and a documented close friend and colleague of John Podesta’s. They go way, way back. Read here, second caption for proof of their close relationship. The email is a response to a forwarded message simply titled, “Thank you.” In his reply, Judge Leon says he’s “got it covered.” We obviously have no idea what “it” is, but it’s fair to speculate – why not? When digging deeper into their relationship, we see Judge Leon and John Podesta co-teach a congressional investigations class together at Georgetown Law, and they’ve done so for a remarkable 21 years. It’s no surprise these two are close. In fact, the only other released email between these two involves the class they teach together (view below or click here to read): 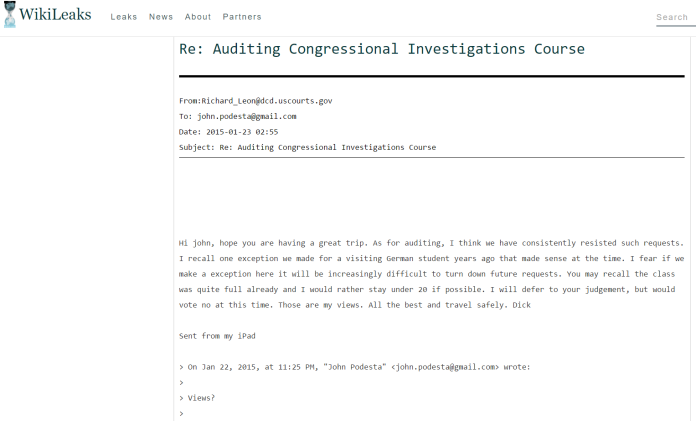 Now that we have some background, we can begin to speculate about what this email means. Most likely, John Podesta forwarded an email from a student to Judge Leon titled “Thank you,” perhaps thanking John or both of them for something they did for him or her. Maybe this student asked for a letter of recommendation or for a reference, and Judge Leon is offering to take care of it by saying he’s “got it covered.” Perhaps it’s something else entirely, but still innocuous.

In reviewing the current judges in Washington, we see eleven non-senior District Judges – all of whom were nominated by Barack Obama and Bill Clinton. Judge Leon is the only non-senior judge who was appointed by a Republican. It’s also worth noting that the Chief Judge was also appointed by Obama. It’s safe to say Judge Leon’s peers are probably overwhelmingly liberal, and have been for some time – this could be an intimidating environment – group-think anyone?

As we go deeper, we see Judge Leon has had a bit of a tepid past. He’s been accused of corruption on more than one occasion, enough that some crazy internet guy created an entire website dedicated to detailing his supposed corruption here. Now, just because some folks say you’re corrupt doesn’t necessarily mean you are, of course, but often where there is smoke – there is fire.

Here’s where the situation gets creepy. Judge Leon was assigned to a case brought by the Associated Press against the State Department regarding the release of Hillary’s calendar and other information in March of last year. Just a few weeks after this email to John Podesta, Judge Leon started making a number of raucous claims to the media. His statements included, “I can’t send the marshals, obviously, out to bring in the documents, at least they wouldn’t know where to go, probably,” and, “I want to find out what’s been going on over there. I should say, what’s not been going on over there,” the judge added, “The State Department, for reasons known only to itself … has been, to say the least, recalcitrant in responding.” The judge even brought up, “a fine on a daily basis” or “incarceration,” as potential forms of punishment – none of which came to fruition, of course.

Apparently, Judge Leon was growing increasingly angry over multi-year long delays the State Department was making over the release of calendars and other information pertaining to Hillary Clinton and her aides – and he wanted everyone within earshot to know it.

The trick is, Judge Leon started making wild statements to the media as far back as July 20, 2015, and the State Department has still only released half of the documents requested in the AP case alone. And conveniently, they will only release the other half a few weeks after the election is over (Surprised? I’m not). Even less shockingly, the (probably tame) documents which were eventually released led to a significant scandal as the Associated Press reported over half the meetings Hillary conducted while at the State Department were held with donors to the Clinton Foundation – a blatant misuse of office, corruption at its worst, and clear evidence of pay for play. The AP stands by this story for good reason – they’ve been working on it for years, and it’s a good, important story.

To put the extent of this ongoing corruption into perspective, the State Department recently said it would take 75 years to release emails from Hillary’s aides… 75 years. Also, while Judge Leon continues to lambaste the State Department and set arbitrary deadlines for documents even to this day, the State Department continues to stonewall everyone with no legitimate repercussions whatsoever. Judge Leon even recently denied The Daily Caller’s request to depose State Department officials in an entirely separate lawsuit for documents regarding Hillary’s security training. A small set of documents was finally released a couple of weeks ago, showing Hillary did not have the proper training. The rest were supposed to be released on October 10th, but obviously the stonewalling continues.

I don’t know about you, but regardless of the story behind the WikiLeaks email here, something smells like really rotten, really stinky shit to me. Judge Leon’s over-zealous media statements are starting to smell like an aggressive cover-up. Considering the fraud and corruption evidently running rampant within the Hillary camp, I’d say Judge Leon’s very close relationship with Podesta has suddenly become a significant, bright and gleaming ruby red flag.

The end is near folks. Soon this will all be over. Stay tuned.