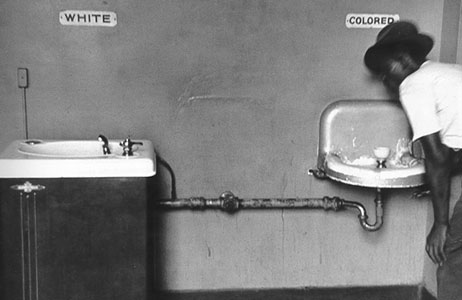 With Donald Trump rallying the racists of the country from their slumber, maybe its time we started having some real talk. Thanks to the Civil Rights Act of 1964, it’s already illegal for businesses to discriminate against customers based on race, color, religion, and national origin. But what about sexual orientation?

In fact, why stop there? Why should it be legal for any citizen to spew bigotry towards their fellow citizens, or even non-citizens for that matter? Perhaps its time we consider expanding upon the Civil Rights Act of 1964 – perhaps as the “Civil Rights and Enforcement Act of 2016.” Donald Trump’s supporters might think twice about spewing hatred for illegal immigrants if the penalty for insulting illegal immigrants or any other minority group was a few years jail time.

Ideally, if we could implement federal corporal punishment laws for such crimes, anyone caught slandering illegal immigrants or demanding they “go back home” would be subject to public lashings. Only a child would be so ignorant to refer to an entire group of people as “illegals,”- these bigots should be treated just like disobedient children. The same goes for anyone who says anything harmful about blacks, Muslims, homosexuals, women, or any minority group we can keep protected. We are stronger together. I’m not advocating corporal punishment for youth, of course, but anyone over the age of eighteen who supports Donald Trump, and who therefore supports racism, should be labeled a “bigot,” and treated accordingly – perhaps even harshly. On a side note, we cannot allow people to vote for Donald Trump. They should be ridiculed and attacked, even intimidated at the polls if that’s what it takes. Needless to say, I agree with Christian Gabriel from the Huffington Post – he tells it like it is.

It’s sad it’s come to this, but desperate times call for desperate measures. Our country is on the verge of electing a racist, homophobic, xenophobic, Islamophobic, sexist white rich entitled man by the name of Donald Trump, and anyone who could support such a monster should be stopped in their tracks, by federal force if necessary. The laws on the books exist to protect us from monsters like this.

Despite all the controversy, Hillary Clinton didn’t go far enough when she said 50% of Donald Trump’s supporters are “deplorable”. The truth is, 100% of his supporters are clearly deplorable. They are all racist, homophobic, Islamophobic, sexist and xenophobic – without question. The only way we can stop this scourge of hate from existing in our society is to pass laws on the books which slowly and methodically eliminate them from our ranks. Because it’s such a huge endeavor, this task would likely require the creation of a Federal Department of Public Decency. This agency would be tasked with monitoring, labeling, and controlling bigotry in all of its forms. Imagine living in a country where bigotry and hate are all but eliminated – unlike Trump, this really would make America great again.

For those of you who read this far – this article is 100% sarcasm. It pains me that I have to spell this out. Speaks volumes about the deluge of garbage we’re reading today if folks can’t tell this is in jest.