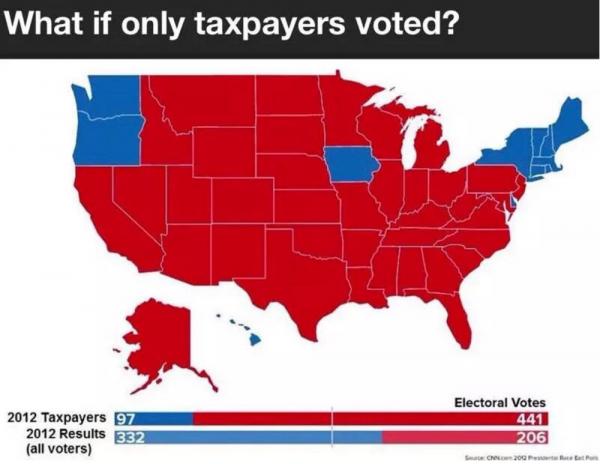 This might be the most disturbing electoral map ever created – even though it’s been skewed from a map of white voters. To envision so few people might vote Democrat if only taxpayers could vote is enlightening to say the least. This map originates from a liberal CNN-data fueled BuzzFeed article some time ago covering a multitude of antiquated and restrictive voting scenarios. In this scenario, both men and women can vote, but an effective poll tax is added back to exclude non tax paying voters. The poll tax, of course, disproportionately and significantly affects poor ethnic minorities as an unintended consequence. When they weren’t attacking black communities and destroying black lives and families – the Democrats aimed to eliminate blacks from voting and Republicans from office (that is, until they managed to manipulate the black community into voting Democrat in later years). To estimate the effect of a modern poll tax, and due to a lack of data, BuzzFeed smartly chose to show only white men and women voters.

If you like this content, please take a brief moment to donate and help us do more. Even a tiny bit helps a lot:

And yes, we are aware of this, we just disagree with the “falseness” of the “doctored” label as BuzzFeed was specifically trying to simulate the effects of a poll tax. Since we know the majority of poor, non-taxpayers are non-white (nearly 60%), and white people make up close to 90% of all taxpayers, we see good reason to agree with BuzzFeed’s assumption. Also, nearly 50% of nonvoters are minorities, and they make up only 20% of likely voters. You only need a small percentage change in demographics to flip most states from blue to red. Additionally, as everyone in this map would be considered a “taxpayer” due to the poll tax, the label sticks. Is it perfect? No, as we are obviously counting white non-taxpayers disproportionately. Is the map still probably correct? Yes. Remember folks, estimates are estimates, It’s impossible to determine exactly how many income taxpayers voted, and which candidate they voted for in the last election. Considering old voting laws like the poll tax also sought to provide greater representation to tax payers and land owners (aka, the real stakeholders), it’s safe to say an electoral map of solely taxpayers would look very similar to this. Simply put, since a state goes blue or red on very minor swings in the electorate makeup – we can make an educated guess. This is why we make assumptions.

If you don’t like this particular map (Snopes anyone?) – which is admittedly a postulate – and you instead seek biased media confirmation with rock-solid boring geek data, a slanted 2012 New York Times story inadvertently determined seventy five percent of voters near the poverty level voted Democrat in recent presidential elections. Considering this voting block is massive – despite what the New York Times would have you believe – it’s highly likely a map just like this would pan out. Last time I checked, there are nearly 50 million people in poverty in the United States. If we assume just 25% of them vote, and if 75% of those voters voted Democrat, that’s a voter swing of nearly 10 million in favor of Republicans. This would have resulted in a landslide victory for Romney, with 60 million votes for Romney to Obama’s 55 million. Guess what? The map above shows such a landslide victory. To put this into perspective, such a victory would approach the margin won by Ronald Reagan in 1980, and this was that map:

And for all you picky people, Romney’s win would have looked like this: 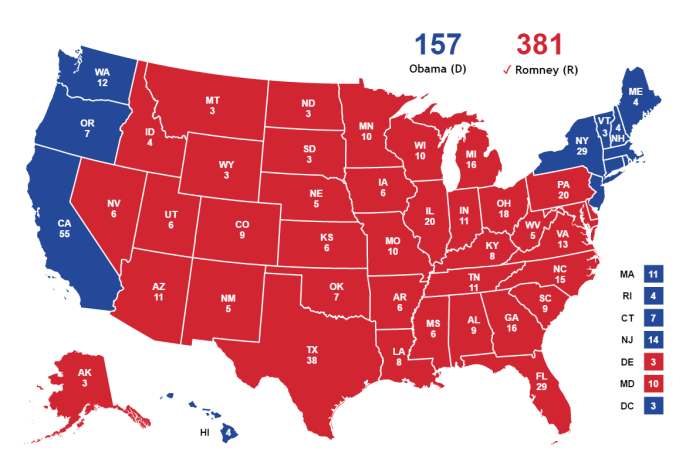 Look familiar? If you need more evidence than this, you’re thinking too hard – or perhaps too little. Looking at a map of white voters is clearly upsetting to some folks, but it’s probably shockingly accurate, and can be backed-up with basic data from other sources. Additionally, this data backs up our assumption even further. If anything, based on the available information, the original “doctored” map might be generously blue.

The bigger question is how can we decrease the overwhelming poverty rates among blacks and Hispanics (along with everyone else, of course)? However, racial issues aside, perhaps we should be asking why non-meaningful taxpayers are even allowed to vote in the first place? Since tax-dodging corporations can’t vote, we won’t worry about them for now – we’ll just focus on individuals. We’re not recommending a poll tax or any other specific approach necessarily – we’re just asking the question. Specifically, we’re looking at those of working age (not retired) who don’t pay income tax or capital gains tax and are clearly not contributing to the federal government in any meaningful way. To be clear, married couples with only one working spouse file jointly, so they both pay taxes. Of course, there should be some exemptions, the disabled, the retired, spouses, all veterans and those currently serving for example. We’re solely talking about people who are truly on the self-imposed federal dole – and for the record, property tax and sales tax go to state and local government, not the federal government. If you pay next to nothing towards the federal government, why should you have any say in how it operates? In fact, our founding fathers, and particularly the godfather himself, James Madison, absolutely supported a measure like this.

James Madison wrote extensively on oppression, and he feared the greatest risk of oppression in the United States would come from those citizens who did not own property. Madison believed that those who did not own property would likely outnumber those who did, thus providing them with a stronger voting block. As such, he feared an oppression of the minority rich, not unlike what the Nazis did to the wealthy minority Jewish class in Germany in the early 20th century. Madison also feared oppression by the rich, but decided their minority status would put them at much greater risk in a true democracy – this despite their greater individual wealth and influence. His solution was to provide two thirds of the voting power to the wealthy.

Perhaps it’s time we reconsider Madison’s ideas. If an overwhelming number of tax paying citizens votes Republican, maybe we should take note. The core of our society has illuminated the “check engine” light – a cry for help. While those of us who do not pay taxes continue to vote for more taxes, and more spending, it’s safe to say that eventually the chickens will come home to roost. While non-taxpayers continue to vote for the likes of Barack Obama and Hillary Clinton, taxpayers will overwhelmingly continue voting for lower taxes, less regulation, more freedom, less spending, and a stronger economy.

As Margaret Thatcher once said, “The trouble with Socialism is that you eventually run out of other people’s money,” and as James Madison said, “The accumulation of all powers, legislative, executive, and judiciary, in the same hands, whether of one, a few, or many, and whether hereditary, self-appointed, or elective, may justly be pronounced the very definition of tyranny.” Notice he specifically says many and elective, while also pointing out the obvious. Perhaps Madison knew we would be destined for tyranny without voter checks and balances like these?

If you enjoyed this article, please take a brief moment to donate and help us do more. Even a tiny bit helps a lot:

86 thoughts on “What If Only Taxpayers (or White People) Could Vote?”